INTRODUCTION
The Celiac Disease Foundation is the nation’s leading celiac disease patient advocacy organization. Our primary obligation is to vigorously pursue every viable path toward treatments and a cure. The nearly 50% of Americans with celiac disease who report that they still suffer from disease symptoms despite their efforts to strictly adhere to a gluten-free diet deserve nothing less.

As science has evolved over the years, so has the Celiac Disease Foundation’s work. Earlier in the Foundation’s history, our focus was to increase the disease diagnosis rate to assure more patients were treated with a gluten-free diet, and to create a safe, abundant, accessible, and affordable gluten-free food supply.

While these goals remain important, with better physician understanding of celiac disease and a plentiful array of gluten-free products thanks to your generous support of our work, the Foundation’s agenda has shifted toward supporting biomedical research for drug treatments and a cure. This involves investing in cutting-edge tools to support researchers, funding direct grants for promising research, and creating and sustaining an advocacy effort in Washington, D.C. to compel the NIH to fund celiac disease research at the level comparable to other diseases with similar public health impact.

Today, I am pleased to share in some detail a new and exciting research grant for a study, Development of a Novel Dietary Treatment for Celiac Disease, that may significantly reduce the suffering experienced by our patient community.

In their three-year grant proposal, Dr. Wenjun Zhang and Dr. Jorge Dubcovsky of the University of California at Davis, a world leader in plant science, summarized the goal:

Wheat is an important crop that provides 20% of the calories and proteins consumed by the human population. Unfortunately, some of the seed proteins that form the gluten contain small sequences, called celiac epitopes, that are not digested and can be mistakenly recognized as harmful by the human immune system. Repeated ingestion of these proteins triggers celiac disease and wheat intolerances in susceptible people.

One strategy to reduce wheat allergenicity is to eliminate the proteins that carry these problematic epitopes; yet this is not an easy task to accomplish because there are approximately 60 expressed gluten proteins in the wheat genome. These genes are distributed in 12 different sites of the wheat genome, naturally dividing the problem of eliminating undesirable gluten proteins into smaller problems, which may be solved independently. Different research groups can work independently in different gluten chromosome sites to remove the “bad” genes, and later combine the clean chromosome sites by crossing and breeding.

The objective of the UC Davis project supported by the Celiac Disease Foundation is to generate one pasta and one bread wheat without any epitopes. Using crosses with these clean lines, researchers will be able to test if a modified gluten site is “clean” from harmful celiac epitopes. These clean lines will be also useful to test the effect of clean synthetic glutenin genes on pasta and bread quality. The UC Davis team plans to make all the lines generated in this project available to other researchers, to promote the formation of a collaborative group of scientists working together to reduce wheat allergenicity and, in the long-term, develop a celiac-safe wheat.

If scientists can moderate or eliminate the toxicity of gluten in wheat for celiac patients, then patients and those who care for them will have another option to more effectively manage the disease.

THE RESEARCH PROCESS
There are numerous parallels between this work and drug development: the pipeline to identify and eliminate the toxicity of gluten in wheat is complicated, time-intensive, and expensive, and while our federal government has not invested in this research, significant progress has been made in solving the complex problems of reducing allergenicity in wheat. Hence our decision to make a strategic research investment now. Some key facts that we knew going into this decision include:

Our research grant is a recognition that plant science for celiac disease is at an inflection point. For the first time, plant scientists have both the knowledge and the tools to bioengineer a celiac-safe wheat. What is lacking is adequate financial resources, especially in academic research centers where much of the work globally is being done in this field. And that is where the Celiac Disease Foundation, with your sustained support, can help.

What plant scientists have learned in just a few years is amazing:

Dr. Zhang has already generated a wheat gene deletion that eliminates all the alpha gliadins of chromosome 6D, which are among the most allergenic gluten genes (see multiple red bars). The newly created wheat variety was grown in a highly controlled environment at UC Davis to see if the plant’s hardiness, texture, flavor, or anything else was affected. The good news is that the elimination of the alpha gliadins “did not decrease breadmaking quality.” 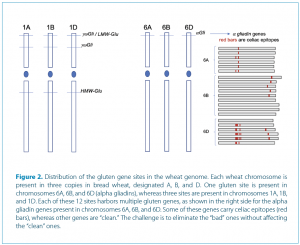 Dr. Zhang has also edited out the α-gliadins on chromosome 6A and is using CRISPR to eliminate the “bad” α-gliadins on chromosome 6B. We want to stress that the new varieties are not yet safe for people with celiac disease because they still have multiple sites that contain “bad” genes, but they do demonstrate a proof of concept of a pathway to keep reducing wheat allergenicity. The study hypothesizes that the fewer celiac epitopes the wheat product has, the lower the allergenic response people will have, reducing the incidence of wheat intolerance in the population.

Because there are so many possible genetic combinations that must be created and tested, the UC Davis lab is organizing other research laboratories around the world to join in this effort – essentially dividing up the work now with the goal of consolidating the research into wheat varieties that can be tested against a living celiac disease model (for example, a living intestinal villi tissue sample or a mouse model).

Researchers like Dr. Zhang and Dr. Dubcovsky are increasingly confident that they can create a wheat variety that not only reduces wheat allergenicity, but can be successfully grown by farmers and milled into flour so that one day, people with celiac disease may be able to enjoy wheat-based products like pasta and bread.

CONCLUSION
Our research investment model is clear. We fund the best scientists in the best research institutions in the world and empower them to do what they do best. Dr. Jorge Dubcovsky is a world expert in wheat, and his Dubcovsky Lab at UC Davis is home to the nation’s top researchers in wheat breeding, like Dr. Zhang. Dr. Dubcovsky and Dr. Zhang are deeply committed to finding a solution to wheat toxicity for celiac disease patients.

The Celiac Disease Foundation has granted UC Davis $180,000 to fund this three-year research study, but as Dr. Dubcovsky noted to us, this only funds 50% of Dr. Zhang’s time. Our goal is to double this funding to $360,000 as quickly as possible so that Dr. Zhang may work full-time for the next three years on the research that will provide another option for celiac disease management: celiac-safe wheat. As you know, we are in the midst of our Annual Gift of Hope Challenge. The Celiac Disease Foundation Board of Directors has generously offered to match every gift up to a total of $150,000. This is our most important fundraising campaign of the year, the gifts that help fund our work. If at all possible, please give.

If you would like more information about the Development of a Novel Dietary Treatment for Celiac Disease study or anything else about the Foundation’s work, please reach out to us at [email protected] or 818.716.1513, x102. We look forward to hearing from you.

Thank you for making our work possible,