Biopsy Samples and the Diagnosis of Celiac Disease 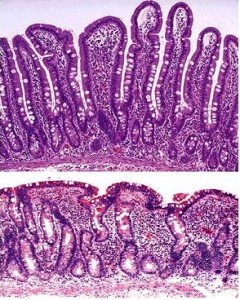 Above: Normal villi; Below: Celiac Disease

Those who have the standard clinical symptoms of celiac disease, such as sensitivity to gluten, irritability, abdominal pain, or a positive blood test, may undergo an endoscopy to confirm their diagnosis. During the procedure, doctors take samples of tissue (a biopsy) from the small intestine to see if there is damage or flattening of villi. Under a microscope, a pathologist can look for the key characteristics of the disease and give a proper prognosis.

Recently, leading physicians have debated the best method of collecting samples. Guidelines state that doctors should take between four and six biopsy samples to help confirm celiac disease, but how should those samples be collected? There are two ways. The first requires taking two samples at once – a double biopsy – using a collection tool, or forceps. The other requires two samples be taken separately. Currently, the clinician collecting the sample makes this choice, but the latter method has proven to be directly related to a more accurate diagnosis.

Though a double biopsy takes less time, is it as effective?

In a study that took place from August 2012 to February 2013 at Columbia University in New York City  and co-authored by CDF Medical Advisory Board Member Dr. Peter Green, 86 patients had endoscopic procedures with samples taken. Out of those who had a double biopsy, 42% had samples that were well oriented – of the proper size and of good quality for analysis. Conversely, those who had samples collected in two different passes resulted in 66% of samples being well oriented.

“Endoscopic biopsy technique in the diagnosis of celiac disease: one bite or two?” an article published in Gastrointestinal Endoscopy analyzing this study, notes that the orientation of samples has critical importance with regard to the diagnosis of celiac disease. The difference in proportion of samples that were the proper orientation was proven to be statistically significant. This means that despite the ease of taking two samples at once, the article recommends that clinicians use the single sample technique.

The article also urges readers to remember, “Taking 1 biopsy per pass of the forceps does not mean that the recommended number of samples be reduced, but that practitioners consider using the single-biopsy technique to obtain the 4 to 6 specimens necessary for the assessment of celiac disease.” Overall, this study demonstrates the importance of choosing proper sampling techniques when diagnosing celiac disease through small intestinal biopsies. Other studies have not only addressed how samples are collected but have analyzed the best size tool with which to collect samples and how many samples should be collected.