Celiac Disease Most Common Among Americans with Punjab Indian Ancestry 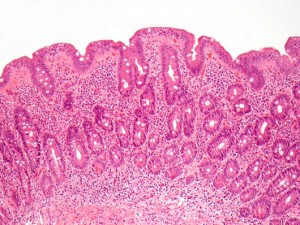 It is a commonly held belief that, in America, celiac disease occurs most frequently in women of Caucasian descent. A recent study, led CDF Research Committee member Benjamin Lebwohl of the Celiac Disease Center at Columbia University, sought to examine that assertion, and turned up some unexpected information about the ethnic distribution of this widespread autoimmune condition.

Researchers assessed duodenal biopsy samples from over 450,000 Americans, submitted to the national pathology laboratory, Miraca Life Sciences, during the years 2008-2015. These biopsies were examined for evidence of villous atrophy, a visible condition which is strongly correlated with celiac disease, and were then grouped using a previously published algorithm based on patient names.

By a significant margin, individuals from the Punjab region of India were found to have the highest rate of villous atrophy. All other specified ethnic groups (East Asian, Hispanic, South Indian) revealed rates either comparable to, or lower than, the rate determined for the general American population. For those of Jewish ethnicity, the rate of villous atrophy was slightly higher for Ashkenazi than for Sephardic Jews. Dr. Lebwohl stated, “our results show that celiac disease does not only affect Caucasians and is present in a variety of ethnic groups in the United States. We need to be on the lookout for celiac disease in all Americans with compatible symptoms.”

Interestingly, the study also found that men and women were equally likely to have villous atrophy on duodenal biopsy, a finding that directly contradicts the common perception that celiac disease is more prevalent in women than in men.