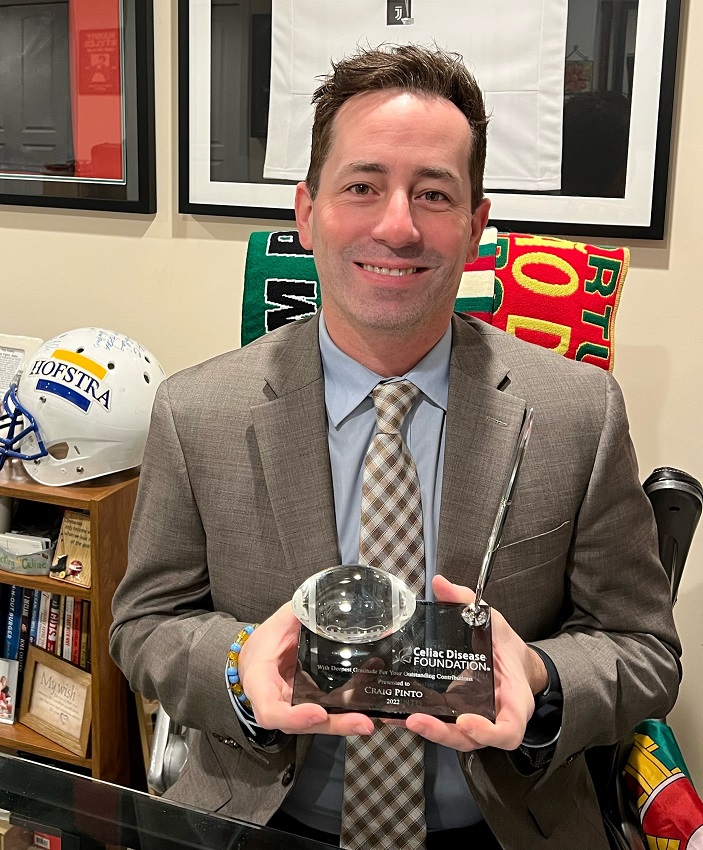 Diagnosed with celiac disease more than 20 years ago, and with Crohn’s disease 10 years before that, Craig has been a stellar example of resilience in the face of challenge. Through the years he has brought a passionate dedication, using his experience to benefit other people in the celiac disease community. As Craig departs our staff, we recognize with deep gratitude his significant contributions to our shared mission of accelerating diagnosis, treatments, and a cure.

Craig’s work on behalf of the patient community is varied and impressive. He holds four (!) Guinness World Records – all tremendous accomplishments that he used to raise money for celiac disease research and programs.

Among his many notable achievements, Craig established the basis for what is now known as the Foundation’s beloved annual Turkey Trot. Started as a 5K Fun Run/Walk in 2015, the event drew little more than 100 people who united around the common cause of supporting each other while raising awareness of celiac disease and funds for research, though growing to draw increasingly more attendees, sponsors, vendors, and supporters pitching in from throughout the Tri-State area.

When Craig joined the Foundation, he brought inspirational vision and boundless generosity to our team, not only by establishing our signature Student Ambassador Program, but also through partnering to expand the Turkey Trot nationwide, with four in-person locations in 2019 and, due to the COVID-19 pandemic, an interactive virtual event with participants from nearly all 50 states in 2020 and 2021. Now fully virtual, the 2022 event drew 825 participants from 46 states, Canada, and Guam, raising nearly $200,000 for research funding.

While Craig will now take his talents to other arenas, he leaves a remarkable gift through this lasting, impactful legacy that will benefit the celiac community long into the future.

We are deeply grateful to Craig for the enthusiasm, innovation, and compassion he has brought to our collective efforts, and we wish him the very best in his future endeavors!