Team Gluten-Free is Making a Difference!

Team Gluten-Free is a community fundraising program that provides a simple way for athletes and non-athletes alike to raise awareness and funds for Celiac Disease Foundation’s programs for advocacy, education, and advancing research. Fundraising efforts may include any event from marathons to triathlons, bake sales, movie nights, wedding favors, community service projects, or any way that you can imagine raising funds. The money raised by Team Gluten-Free members supports CDF’s mission to drive early diagnosis and treatment of celiac disease to improve the quality of life for all people with gluten-related disorders. 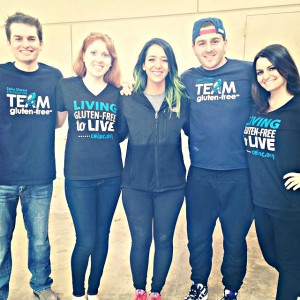 On April 25, 2015, Celiac Disease Foundation’s Team Gluten-Free teamed up with YouTube Star Julien Solomita to host a Celiac Awareness Meetup in Woodland Hills, CA! Julien was diagnosed with celiac disease as a child, and is passionate about raising awareness for the disease. The event featured a photo booth with Julien, autograph signing, Team Gluten-Free t-shirt sales, and plenty of gluten-free snacks! The over 200 attendees were eager to meet their favorite YouTube star and learn about celiac disease. It is through events like this that Team Gluten-Free is helping fulfill the mission and purpose of CDF.

On May 16, 2015, Team Gluten-Free (TGF) members of all ages conquered the Renegade XTERRA Triathlon, Duathlon & 3 Mile Trail Run in San Dimas, CA. Team Gluten-Free was thrilled to be named the Official Charity Partner of this race series! Leading up to the event, participants had an opportunity to create a team, fundraise for Team Gluten-Free, or make a donation. TGF members showed up in their gear for this event, and the beautiful trail was filled with friends, family, and Foundation staff who were there to support and cheer on the runners. The 2015 Renegade XTERRA TGF Team raised over $1,200 for celiac research!