Three weeks ago Celiac Disease Foundation CEO Marilyn Geller attended the Digestive Disease National Coalition (DDNC) Public Policy Forum in Washington DC. Marilyn joined celiac execs Alice Bast of NFCA, and Mary Schluckebier of CSA, to lobby congressional leaders to support funding for the National Institutes of Health at a level of $32 billion and to support the resolution for May as National Celiac Awareness Month. Marilyn met with representatives from the offices of Senators Feinstein, Boxer and McCain and Representatives Schiff and Sherman to discuss the necessity of increasing the rate of and shortening the time to diagnosis for celiac disease.

“I am Marilyn Geller, and I am CEO of Celiac Disease Foundation, a voluntary national health organization representing the three million Americans with celiac disease. Celiac disease is the world’s most prevalent genetic autoimmune condition. People with celiac disease cannot eat even a microscopic amount of gluten, a protein found in wheat, rye, and barley, without damaging their small intestine. Untreated, celiac disease can lead to osteoporosis, infertility, neurological conditions, and cancer. Delay in diagnosis increases the risk for other autoimmune diseases like thyroid disease, diabetes and pernicious anemia. Today it is estimated that of the three million Americans with celiac disease, 2.5 million are yet to be diagnosed. To put this into perspective, two million people have Alzheimer’s Disease. One million more people have celiac disease and yet you probably have not heard the word “celiac” until today. The travesty is that a simple and readily available blood test, followed by a confirming endoscopy, can diagnose celiac disease. The treatment requires no additional medical intervention, only strict adherence to a gluten-free diet. Not an easy diet to follow since it requires that people with celiac disease be vigilant about cross-contamination of their food, but one that is life-changing – putting sufferers back to work, back to school, and back to living a productive life.

I know this not only through my work with Celiac Disease Foundation but because my son Henry was not diagnosed until he was 15, after spending most of his high school freshman year in bed. This was after lifelong symptoms, and countless tests, procedures, hospitalizations, and tears. Today, after nearly 5 years on the gluten-free diet, he is a sophomore at UC Berkeley, running for student government. This is terrific, but last year he was diagnosed with two different autoimmune thyroid diseases which require lifelong medication, in addition to his celiac disease. I am told that had he been diagnosed with celiac disease earlier, he most likely would not have any thyroid disease today.

I have two messages to speak to today. The first is to maintain the current funding level for the National Institutes of Health. It is only through such funding that there may one day be a strategic plan for celiac disease research awareness, and a cure for our future generations.

The second is to support the resolution for May as National Celiac Awareness Month. I have a Master’s in Public Health and my husband is a physician. It never occurred to us that our son had celiac disease. There are more than 200 symptoms associated with celiac disease, and it is the last disease that most physicians test for, if at all. Designating May as Celiac Awareness Month provides celiac organizations and medical and research centers with a platform to promote to the media so that the 2.5 million undiagnosed Americans may learn to advocate for their diagnosis and one day soon end their needless suffering.

On behalf of the Celiac Disease Foundation, thank you for your time and support.” 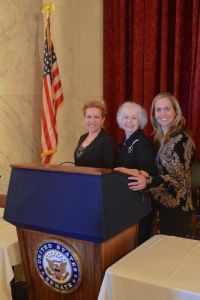