Latiglutenase is a dual enzyme investigational product designed to break down gluten in the stomach. When taken with meals it offers celiac disease (CeD) individuals, as an adjunct to a gluten-free diet, protection against unintended gluten consumption. The benefit to those with CeD is reduction of debilitating symptom distress as well as protection of small intestinal health. These benefits have been demonstrated in several clinical trials, the most recent one just completed at the Mayo Clinic. Latiglutenase is being developed by ImmunogenX, Inc. in collaboration with world leading clinicians as it progresses towards Phase 3 trial(s) preceding market approval.

The recent Mayo Clinic Phase 2b trial (IMGX003-NCCIH-1721) was led by Dr. Joseph Murray and funded by the National Center for Complementary and Integrative Health (NCCIH) of the U.S. National Institutes of Health (NIH) in a grant to ImmunogenX. The trial involved a gluten challenge in which subjects were given 2 g of gluten per day for 6 weeks. Endpoints such as small intestinal health (histology) as measured by villous height to crypt depth ratio (Vh:Cd) and intraepithelial lymphocytes (IEL) as well as symptoms and gluten-induced antibodies were measured before and after the gluten challenge period. Half the subjects were given latiglutenase (n=21) and the other half were given placebo (n=22). Furthermore all subjects provided weekly urine samples before, during, and after the gluten challenge period that were analyzed for the presence of gluten.

Study results demonstrated latiglutenase’s ability to diminish the potentially harmful effects of intentional gluten ingestion for all of the endpoint measurements when compared to placebo. Study subjects experienced 60-88% less small intestine damage and 53-99% less symptoms when treated with latiglutenase versus placebo during the 6-week treatment period. Additionally, subjects experienced a 95% reduction of absorbed gluten immunogenic peptides (GIPs) as measured in their urine. The figure below shows the considerable degradation of GIPs by latiglutenase over the 6 week gluten challenge period relative to placebo subjects. 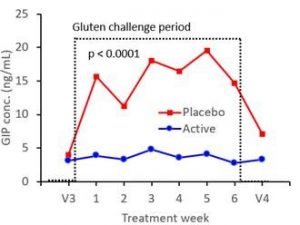 ImmunogenX and the Mayo Clinic, in collaboration with Columbia University and two private practice sites, are now running a Phase 2b trial (IMGX003-NIAID-1821) described as a real-world trial with emphasis on the reduction of symptoms in subjects taking latiglutenase vs. placebo. This trial is funded by the National Institute of Allergy and Infectious Diseases (NIAID) of the NIH. This multi-site final Phase 2b trial is vital as it is the basis or predicate for Phase 3 trial(s) and will help to optimally design the latter trial(s). These researchers encourage CeD patients to enroll in this exciting study to advance this promising new therapeutic candidate through the process toward FDA approval. The trial should be attractive to potential participants as there are no biopsies, no injections, every participant will receive latiglutenase treatment over some portion of the trial as well as supporting a therapeutic candidate with demonstrated efficacy and safety. Your participation may help speed the availability of this effective and safe therapeutic for your own daily lives. More information can be found at solutionsforceliac.com and clinicaltrials.gov.

Latiglutenase is a high profile therapeutic treatment on the basis of its compelling clinical data and as such has been the recipient of yet another highly competitive grant from the NIH; this time from the National Institute of Diabetes and Digestive and Kidney Diseases (NIDDK). This trial (IMGX003-NIDDK-1921) is being conducted at Stanford University and focuses on patients that have both Type 1 diabetes (T1D) and CeD. These two immune diseases are genetically linked. Consequently, about 6-8% of T1D patients have CeD compared to only about 1% in the general population. This trial has started enrolling and further information can be found on ImmunogenX.com and clinicaltrials.gov

Would you like to participate in celiac disease research? Add your data to our iCureCeliac® patient registry today. iCureCeliac® is a free online portal for patients, or their caregivers, to provide critical insights into life with celiac disease. Your participation will help create better diagnostic tools and treatments for cross-contact and gluten consumption, governmental policy changes, and access to new and innovative clinical trials nationwide, which may, one day, cure celiac disease.