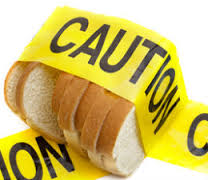 Celiac disease is a genetic autoimmune condition triggered by gluten that causes the body’s immune system to attack itself, damaging the small intestine. A wide range of symptoms can occur in different individuals, including but not limited to: unexplained iron-deficiency anemia, fatigue, bone or joint pain, arthritis, seizures or migraines, abdominal bloating and pain, and depression and anxiety. Three million Americans, and at least 70 million people worldwide, are affected by the disease[1][2]. Nevertheless, currently, the only treatment for the disease is the gluten-free diet, which means no ingestion of wheat, barley, rye, triticale, or their derivatives[3]. Maintaining a 100% gluten-free diet can be quite challenging, especially considering that many people react severely to the cross contamination of even minute amounts of gluten. Fortunately, Alba Therapeutics, Teva Pharmaceuticals USA, and Cephalon have been working with three members of Celiac Disease Foundation’s Medical Advisory Board, including Dr. Daniel Leffler, Dr. Peter Green, and Dr. Joseph Murray, to develop a new drug called larazotide acetate to help those suffering from celiac disease[4][5].

Phase two trials for larazotide acetate were just recently completed, and the results proved hopeful. So far, it has been demonstrated that the drug might be able to help not only with accidental ingestion of gluten, but also for refractory celiac disease and continuing symptoms despite a gluten-free diet. With the drug, patients experienced significantly less gastrointestinal issues, headaches, tiredness, diarrhea, and stomach pain, compared to those given a placebo. People with celiac disease have an overproduction of a protein that carries gluten across the gut where it should not exist, which causes immune cells to attack the body, resulting in inflammation and the uncomfortable symptoms associated with celiac disease. Larazotide acetate works by blocking this protein, preventing gluten from leaking across the gut, therefore inhibiting the harmful immune response[5].

Of course, the drug larazotide acetate is not yet on the market and will require further trials, but as long as they prove successful, a launch date of 2018 has been estimated[6]. However, it is important to keep in mind that this would not be a miracle drug to cure celiac disease; rather, it would work in conjunction with a gluten-free diet. With this drug, those with celiac disease would not need to live in fear of accidental gluten exposure, as it would provide a necessary safety net to help those with celiac disease live a more normal life.

The fervent demands by CDF over the last 25 years on behalf of the celiac community for alternative therapeutic treatments are finally being heard. Celiac Disease Foundation is proud to promote clinical trials to support the advancement of research. The introduction of a drug to treat celiac disease may lead to increased diagnosis rates, as physician awareness is closely correlated to pharmaceutical company marketing efforts[7]. Furthermore, CDF is working with the FDA to ensure that the concerns of the celiac community are always considered when decisions are made for the testing and approval of new therapies. CDF is also working with the White House on its Precision Medicine Initiative, which, if funded, promises to marry genomic and big data to enable the creation of personalized treatments for such diseases. As part of this Initiative, CDF will launch a national patient-powered research network (PPRN) for celiac disease that can help patients contribute to research and engage in clinical trials. Funded by the Patient Centered Outcomes Research Institute, which was established by the Affordable Care Act, the PPRN will allow CDF constituents to actively improve and accelerate medical research, and deepen researchers’ engagement with the celiac disease population.

[4] “A Double-blind Placebo-controlled Study to Evaluate Larazotide Acetate for the Treatment of Celiac Disease.” Clinical Trials. US National Institutes of Health, 15 June 2015.

March 18, 2021, was the first day of the NIH’s Accelerating Progress in Celiac Disease Workshop. This workshop is a direct outcome of our advocacy efforts in Washington, DC, in particular the inclusion of report language in NIH’s appropriation budget by our legislative partners on Capitol Hill. (Thank you for...